The amygdala is one pole of the dual origin of the cortical evaluation and plays a central role of human brain function. The rules and profiles of its neurodevelopment are crucial to understanding the brain. Abnormal structural development of the amygdala in children and adolescents has been related to many psychiatric disorders. It is expected to help the risk assessment, early diagnosis and monitoring brain-intelligence development by exploring the structural development of the amygdala in typical developing children. However, the developmental patterns of the amygdala throughout childhood and adolescence have been inconsistent as reported in previous studies. This may reflect a fact that the manual tracing method, which is commonly considered as the ‘golden standard’ in the field, was rarely used while many automatic tracing software were employed in previous studies. It is deserved to validate the developmental curves of the amygdala and examine the effects of any differences in the tracing accuracy of the volumetric segmentation between automatic and manual methods on the subsequent modeling of the amygdala developmental curves.

Zuo lab (PI: Xi-Nian Zuo) published the ‘Next Generation Tools’ paper in the field TOP journal, Developmental Cognitive Neuroscience [1], and demonstrated the work of manually tracing a large longitudinal sample of human amygdalae (N=427) as well as the performance comparisons between manual and automatic methods. Such systematic methodological variability of amygdala volume growth curves from children to adolescents (6-18 years old) revealed the linear growth pattern of amygdala and laid the foundation for building growth charts and applications in pediatrics. 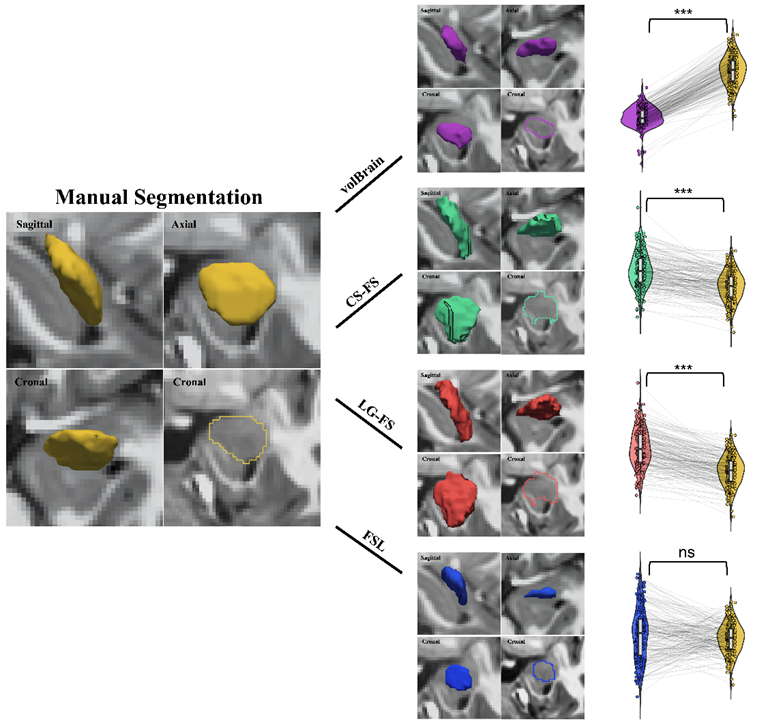 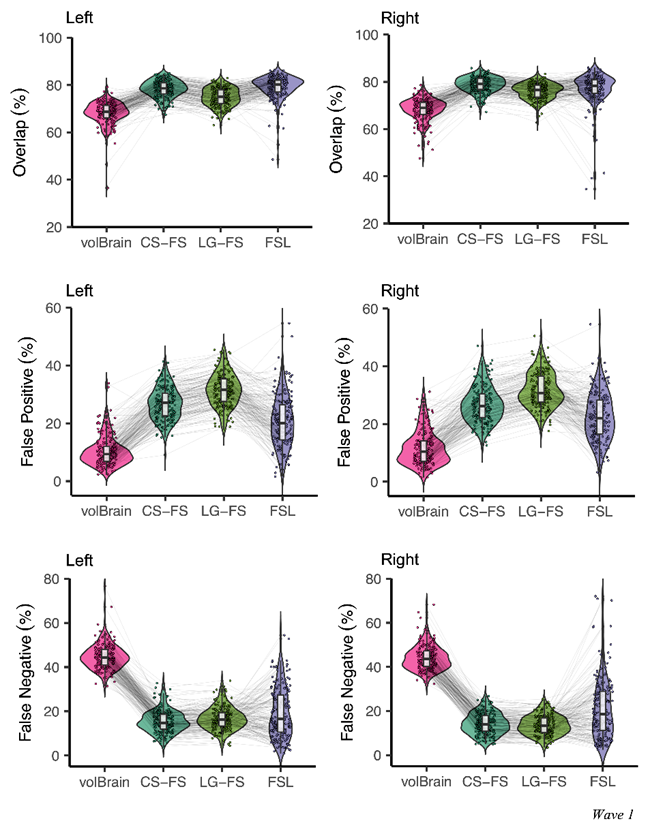 Figure 3. Spatial overlap of automatic segmentations as a function of the amygdala volume.

Figure 3 indicated that the tracing bias was not uniform, higher for smaller amygdalae. Using the manually traced amygdalae, the team revealed linearly increasing volumes across the school ages (6-18 years), which are parallel for both girls and boys although the boys had larger amygdalae than girls. Compared to these linear trajectories, the shapes of developmental curves were somehow similar (but more nonlinear) when using the volBrain derived volumes (see Figure 4). It is interesting that FreeSurfer derived trajectories were more nonlinear and even flatter while FSL produced inverted U-shaped trajectories, which were significantly different from those derived from the manual tracing method. The present work confirmed that the volumetric growth curves of the amygdala estimated by different methods were inconsistent. It highlights the importance of methodological variability evaluation in a developmental sample. Methodological improvements are warranted for current automatic tools to achieve more accurate amygdala structure at school age, calling for next generation tools. 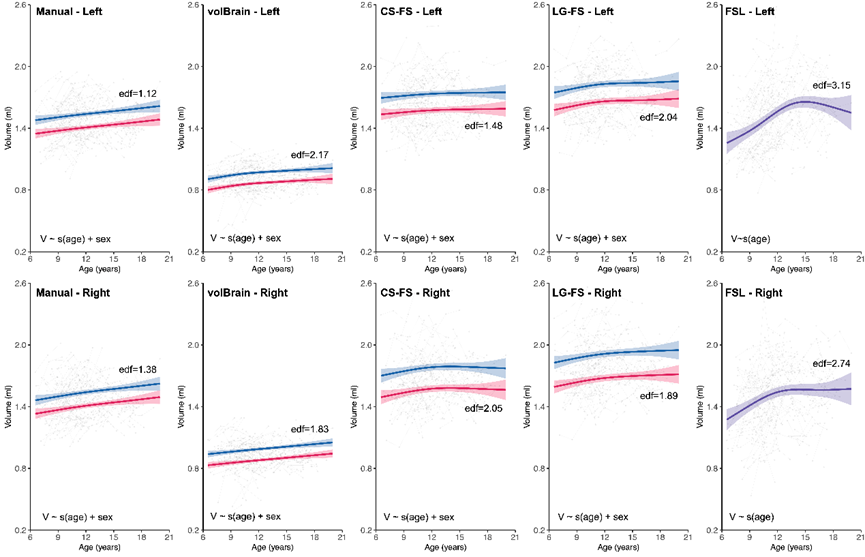 Overall, this study revealed steady growth of the human amygdala, unified the growth curves of non-human primates and human amygdala. This mirrors its functional development across the school age for human beings. This work provides not only a practical guideline for future studies on amygdala in children and adolescents but also its growth standard resources for translational and educational applications. This can be implemented with normative modeling [4,5] for individualized assessments on typical or atypical development as well as their associations with behavioral performance, school achievement and clinical symptoms.

The first author of the paper is Quan Zhou, a PhD student from Zuo lab. The authors also included Ye He, an Associate Professor from Beijing University of Posts and Telecommunications, Dr. Chao Jiang from Capital Normal University, Dr. Siman Liu, a Postdoctoral Fellow from the Institute of Psychology, Chinese Academy of Sciences, and the Chinese Color Nest Consortium. This work was partly supported by the Key-Area Research and Development Program of Guangdong Province, China (2019B030335001), the Start-up Funds at Beijing Normal University, the National Basic Science Data Center ‘‘Chinese Data-sharing Warehouse for In-vivo Imaging Brain’’ (NBSDC-DB-15) and the Beijing Municipal Science and Technology Commission, China (Z161100002616023, Z181100001518003).