In mammals, a larger number of neurons in V1 are devoted to cardinal (horizontal and vertical) orientations than to oblique orientations. In the primate visual cortex, whether all orientations are represented equally is still unclear. Previous electrophysiological recordings led to controversial findings. Both isotropic and anisotropic orientation distributions have been reported. It is also unclear whether different visual areas along the visual hierarchy have different orientation anisotropies.

Fig. 1. Illustration of three types of orientation anisotropies. (A) Illustration of the four grating stimuli used in the present study and one that is presented at the lower left visual field. Black star represents the fovea. The dashed line represents the radial angle (45°) of the location that the stimulus presents. (B) The cardinal bias model, in which more neurons prefer horizontal (0°) and vertical (90°) orientations than oblique orientations. (C) The radial bias model, in which more neurons prefer the orientation pointing toward the foveal fixation (radial angle; e.g., 45° for the stimulus location in A). (D) The combined model is a linear summation of cardinal and radial biases. The red, blue, and gray fillings represent cardinal, radial, and isotropic components. For the lower visual field, V1 contains an overrepresentation of orientations in both cardinal (horizontal and vertical) and radial axes. V4 contains an overrepresentation of orientations along the cardinal axes only.

In this study, the authors analyzed orientation maps in a large set of intrinsic signal optical imaging data and found that both V1 and V4 exhibited significant orientation anisotropies. However, their overrepresented orientations were very different: in V1, both cardinal and radial orientations were overrepresented, while in V4, only cardinal bias was presented. These findings suggest that different cortical areas have evolved to emphasize different features that are suitable for their functional purposes, a factor that needs to be considered when efforts are made to explain the relationships between the visual environment and the cortical representation and between the cortical representation and visual perception. 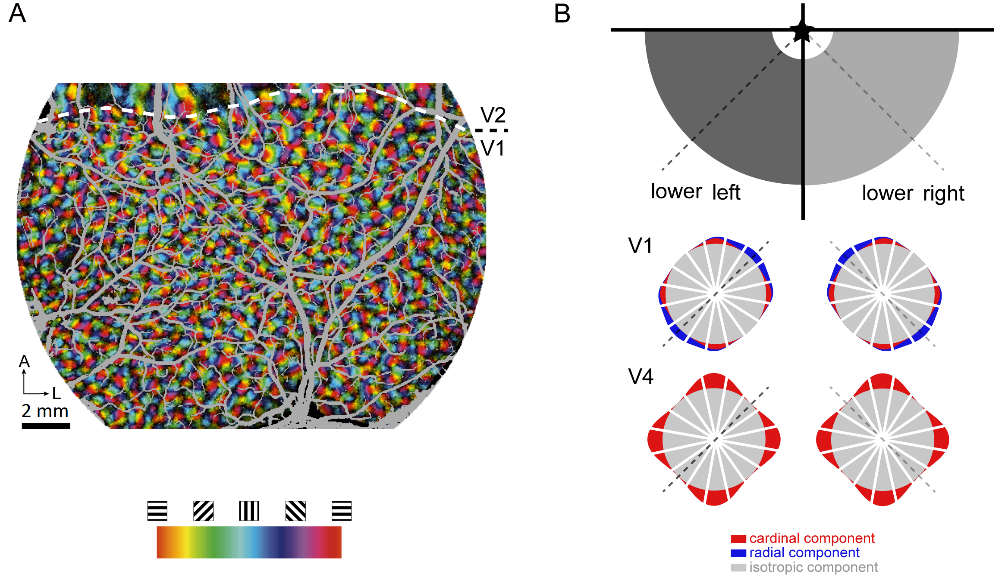 Fig. 2. A: An example of orientation map in macaque V1 and V2. B: Summary of the findings on orientation anisotropies in macaque V1 and V4. The lower visual field is divided into left (dark) and right (light) quadrants, which correspond to the right and left hemispheres, respectively. Black star represents the fovea. Dashed lines represent mean radial angles, which are 45° and 135° for the lower left and lower right, same below.

An important finding is the different forms of anisotropies along the visual pathway. One possible explanation the authors provide is that different orientation representations in V1 and V4 are suitable for different purposes. Since V1 is the first stage of cortical visual processing, it is important to faithfully represent the orientation anisotropy in the natural environment, which contains both cardinal and radial abundances. A realistic representation in V1 may not be directly related to higher-level visual perception but contains all the necessary information for subsequent analysis (e.g., for dorsal and ventral processing). Area V4 may selectively receive partial orientation information from V1 and is designed to emphasize the orientations that are important for object recognition. Another possibility is that, unlike V1 neurons, which mainly code local orientations at object edges, neurons in V4 may tend to code the orientation of individual objects. The abundance of these two types of orientation can be different in the natural environment. For objects, vertical or horizontal positions are apparently more stable and more commonly observed. The orientation of local edges, however, has fewer restrictions. Thus, orientation anisotropies in different visual areas are adapted to the unique contribution of the areas to perception or action and may not necessarily be the same.

Orientation selectivity is one of the most important functional features of visual neurons. By analyzing a large set of optical imaging data, the authors provided first-of-its-kind results on macaque visual cortex. These findings not only shed light on the long-standing question regarding a basic property of the primate visual cortex, but also on the strategy the visual system takes to represent and analyze the visual world.